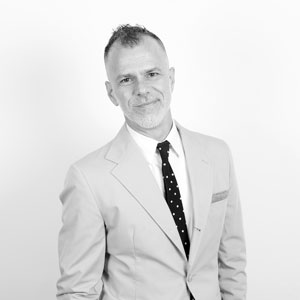 Growing up near Scranton Pennsylvania, James spent a childhood in his grandfather’s bar, serving pony bottles of Rolling Rock to retired coal miners while memorizing verb declensions for the next day’s Latin class. He’s been seeking out and creating such strange juxtapositions ever since.

James started his career in advertising as a founding partner and creative leader of thoughtbubble productions in 1997, a creative agency on the front lines of the digital revolution. There, James led the development of the first online original-content cable channel and the first interactive documentary built exclusively for digital distribution. Thoughtbubble’s ground-breaking initiatives were featured in the New York Times, Newsweek, Ad Age and AdWeek as harbingers of the next generation of advertising content.

His subsequent path to healthcare carved through sectors as diverse as publishing and CPG, QSR and professional sports. As President & Executive Creative Director for Heartbeat—a leading, full-service healthcare agency in New York City serving such clients as Bristol Myers-Squibb, Genentech, Sanofi and Pfizer—James introduced the health & wellness sector to a new and ambitious brand of creative product, unafraid of emotion, rich in craft, and tailored to inspire action. He now runs day-to-day operations and offers generous pours of inspiration to the agency’s award-winning Creative, Tech, and Media teams—all the while, infusing healthy skepticism of the latest thing and fervent belief in building the lasting brand idea. He and his teams have hoisted over 250 advertising awards during the past fourteen years, from Pencils to CLIOs, Webbies to EMMYs.

Sometimes found sitting on a piece of fiberglass off the coast of New Jersey, James is madly in love with two glorious women: his wife, Shawn, and daughter, Hallelujah. His favorite color is white.