I know the pain of losing a loved one to opioid addiction. My family continues to grieve the loss of an incredible young man who, after an awful car accident, began a decade-long battle against addiction to his prescribed painkillers. Three years ago, he lost that battle.

Countless other families have experienced similar losses due to our nationwide opioid crisis. According to the Department of Health and Human Services (HHS), more than 130 people die from opioid overdoses every day. It’s a devastating epidemic that impacts people of any age and from all walks of life. 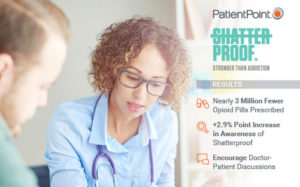 To help combat opioid addiction, PatientPoint® collaborated with Shatterproof – a nonprofit organization focused on ending the stigma of addiction and improving addiction treatment – to create a powerful opioid education program at the point of care. It launched nationwide in October 2017 across the digital PatientPoint engagement platform, reaching an estimated 15 million patients and caregivers each month in waiting rooms, exam rooms, and in the physician back office. The content is designed to increase the awareness of opioid addiction and encourage doctor-patient discussions about other treatment options.

And the best news is, it is working and we are making a difference. An independent analysis by Symphony Health revealed that each of the 20,793 physicians who had the education program in their practices distributed 142 fewer opioid prescriptions over the eight-month study period than closely matched, non-participating physicians. That adds up to nearly 3 million fewer pills prescribed. If that doesn’t prove the effectiveness of messaging to physicians and patients at the point of care, I don’t know what will.

I often talk about the power of messaging at the point of care, but the results of PatientPoint-Shatterproof campaign really drive it home. I encourage you to read the case study for more details about this fantastic campaign and its impact on the fight against opioid addiction. You can find here.